Oscar Oscar Salons has celebrated 30 years of creating award-winning and glamorous hair under the direction of celebrity hairdresser Oscar Cullinan, twice-awarded Australian Hairdresser of the Year. The first Oscar Oscar Salon opened in 1989 in Brisbane and today Oscar Oscar Salons are found in prestigious locations throughout Melbourne, Sydney, Brisbane, Gold Coast and Toowoomba, including at the chic Fashion Precinct at Pacific Fair on the Gold Coast, Chadstone’s – The Fashion Capital Shopping Centre in Melbourne and the prestigious Westfield Bondi Junction.

Oscar Oscar Salons is also home to some of Australia’s best hairdressers, who are regularly involved in events such as Australian Fashion Week and frequently feature in Australia’s leading fashion magazines for their expert hair advice and styling tips.

The team from Oscar Oscar Salons are renowned for creating more than just beautiful hair. Step inside and indulge with luxury hair services, the world’s best hair-care and styling products, relaxing treatments and delectable refreshments all together within the sleek, designer-clad walls. Experience first-hand the exquisite craftsmanship of the Oscar Oscar name known for leading and exceeding all esteemed benchmarks in both hair and the salon environment.

We look forward to welcoming you into our world. 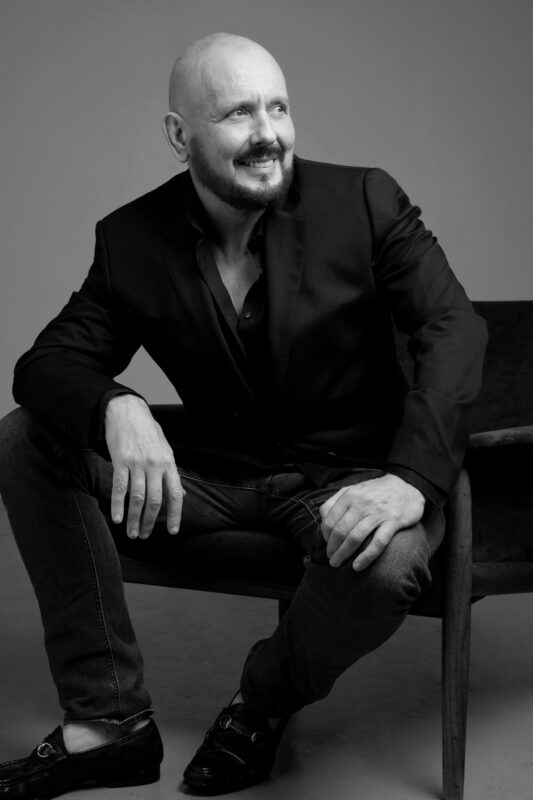 We welcome you to experience our precision cutting, on-trend glamorous colouring and
fashion-inspired styling techniques.
Welcome to a world of change.

"HAIRDRESSING HAS BEEN MY PASSION AND MY LIFE FOR OVER TWENTY YEARS. IT ALLOWS ME TO EXPRESS BEAUTY AND STYLE AS I SEE IT."

Celebrating over thirty years as the owner and director of Oscar Oscar Salons, Oscar Cullinan is one of Australia’s leading celebrity hair stylists; made famous for his rogue charm, resounding determination and visionary leadership, all of which has contributed to Oscar becoming a dominant force in the Australian hairdressing industry. During his career Oscar has also received the hairdressing industries greatest accolades including 2005 Australian Hairdresser of the Year, 2001 Australian Hairdresser of the Year, and 2003 Aveda World Master of the Arts.

Oscar Cullinan, born in the remote countryside of Ireland, Oscar Cullinan developed his interest in hairdressing by sweeping floors in his brother’s salon. Once Oscar left Ireland he travelled throughout the UK and began his fundamental training in hairdressing with the infamous Vidal Sassoon, which is where he began to develop his eye for detail, world-class styling techniques and a desire to become a leader in the hairdressing industry.

Eventually Oscar travelled to Australia as an educator and he instantly fell in love with the country for its relaxed lifestyle and vast opportunities. In 1989 Oscar opened his first hairdressing salon in Brisbane, which was not only a success but it also established Oscar as a creator of opulent hair. Since this beginning the Oscar Oscar brand is now located across the east-coast of Australia from Melbourne to Brisbane and the Gold Coast, with plans to continue expanding the salon empire and affirm Oscar Oscar Salons as an Australian hairdressing-powerhouse.

Oscar’s on-going commitment to producing glamorous and sexy hair has also seen him become aligned with some of Australia’s most high-profile fashion events, including Australian Fashion Week and is regularly called upon for his professional styling and editorial advice by the world’s most glamorous fashion and beauty magazines. It is undeniable that after two decades of producing award-winning hairdressing collections, operating an empire of prestigious hair salons and creating beautiful hair for thousands of clients, that Oscar Cullinan has cemented his position as one of Australia’s leading hairdressing identities, famous for his skill, passion, business acumen and for raising the benchmark of the Australian hairdressing industry.

AHFA AUSTRALIAN HAIRDRESSER OF THE YEAR

AVEDA MASTER OF THE ARTS

AHFA AUSTRALIAN HAIRDRESSER OF THE YEAR

AUSTRALIAN MEN'S HAIRDRESSER OF THE YEAR

AUSTRALIAN MEN'S HAIRDRESSER OF THE YEAR

4 X EDUCATOR OF THE YEAR FINALIST

AHFA VIC HAIRDRESSER OF THE YEAR